So I have spent a bit of time this week playing around with VIRL. I have trialed 3 instances:


I think my takeaway points are:

Don't use VIRL for the NX-OS image!
I was pretty excited to do some NX-OS topologies but I found out pretty quickly that some of the technologies I wanted to play around with aren't support. Below shows the problems I had in trying to establish vPC. 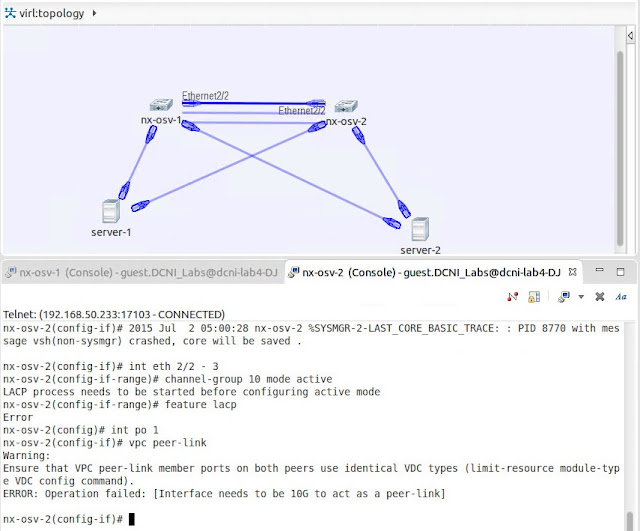 After googling I realised that Layer 2 functionality is not supported in NX-OSv and there is no timeline for the features to be released. I don't think this is made very clear when VIRL is acquired.
Click here for a comprehensive list of what is available on NX-OS.

After this disappointment, I went back to switching and routing and was pretty happy with what I could do again. I tried out some various routing scenarios with multiple IGPs and VLANs. It worked very nicely with 32GB of memory.

I then tried to push it a little more to the limits, so I grew my network to something along the line of a service provider network. At this point I ran out of memory again. :( So I used the option of disabling some of the router from the configuration. See below the option to highlight nodes and click a box to exclude them from the simulation: 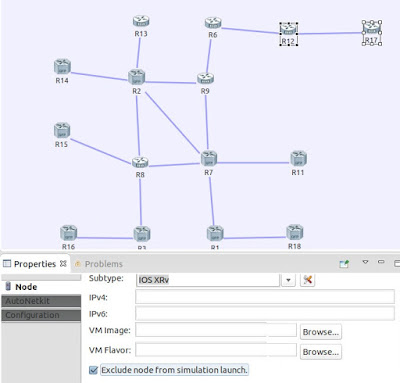 After I did this, the simulation launched without problem, with the two routers excluded. I thought this was pretty good, considering how many CSR routers I put into the network. You can see below on the right the routers that didn't launch are represented with an [ABSENT] tag next to them. 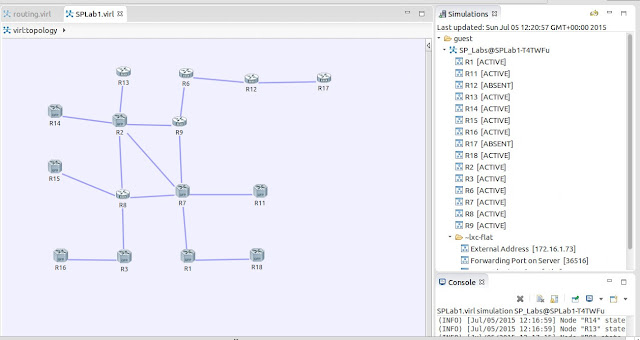 I guess at this point I'm still just feeling my way around, but would I buy it again? Considering how much I've spent on hardware, and with the current $50 off special making VIRL very cost effective comparatively. So yes, I despite some limitations, I think VIRL is a very good investment for anyone wanting to practice and trial network configurations.